What You Should Know About Company Phone Private Use and Termination

What are the legal requirements for using one phone for business and private use? Can the usage of a company phone for private purposes cause work termination?

How do you separate private and business data on a phone? What are the usage agreements for company phones?

These are additional questions that come up when we think about using devices for work. In this article, we’ll be exploring the concerns, legal repercussions, and solutions to the problems with using work phones for private use.

At first, it may be easier to say what one should do with a company phone. However, it all depends on the agreement between the employer and the employee. But, legally, an employer can terminate an employee's job position if that employee misuses the company phone for private purposes.

What causes the major problem is the data protection on company cell phones that's not separated from data in private use. This happens when there is no appropriate software that can completely separate business from private data. That's why many employers use agreements for company phones. In the user agreement are stated the rules for using the company's phone. As a matter of fact, many companies don’t allow employees to use business devices for private use. Moreover, employees can be called upon for disciplinary action when they cause a  phone security breach and when causing an accident while using the phone.

That’s why one should take a look at the labour law and put a user agreement in place when dealing with company mobile phones used for private use to avoid work termination.

However, If the employee in question had been using their own phone for business, it would be difficult for the employer to ask for a phone check-up and even to process company data from such a phone due to GDPR (General Data Privacy Regulation) and the employees right to privacy. So, many employers tend to find a better solution for the BYOD (Bring Your Device) option.

Even if the employer has remote access to the employees' phones, it can happen that when processing the business data or deleting certain data, the employer may accidentally damage the employee’s private data. If this happens, employees may sue the employer for the damage and invasion of their privacy.

So, an employer can terminate someone's job if the employee disobeys the regulations set out for using company phones. This is mostly due to the data protection of company phones when in private use. Every employer wants to be sure that the company data is secure on the phone. When using a company phone for private use, there are greater chances that the phone may be stolen, damaged or unintentionally misused which could lead to data breaches.

Signing a user agreement is legally approved and facilitates and determines actions for company mobile phones in private use to avoid work termination. Employees can expect to find explanations when they are allowed to use the phone and when not, and even which apps are allowed to be used. These agreements can be made even in cases when employees use their personal phones for business. However, there is a better solution available. MDM (Mobile Device Management) software solves the problems with usage of company phones in private use and thus preventing work termination.

The use of MDM software has many benefits for businesses. For example, with MDM software the device’s workspace can be separated in two, one for work only and the other for private use. There are several rental options at everphone, but each option includes MDM. In case of work termination, all business data is securely retrieved from the phone since there was MDM software on employees' phones.  Everything is legally removed from the phone, not endangering part of the software that was for private use. So, the company's mobile phones can be used after termination. This is a completely safe disposal of phones and is environmentally approved.

Nobody wants to get fired just because of improper use of company’s phones. Having two phones is such a nuisance and it’s neither financially nor environmentally acceptable. For some time, container apps were a solution because these containers are basically sperations in the workspace that allow one area just for work, and the other just for private use. MDM software includes containerization, among many other beneficial features. As such it’s the next logical progression from just containerization.

Even though with containerization the business data is encrypted and can’t be copy-pasted outside this container app, there are some issues with this solution. A container app doesn’t work on all operating systems nor with every manufacturer. This means a business might need to use many different apps to manage their entire mobile device fleet which is less than ideal. Here at everphone we found a new solution for companies' phones used outside of work.

At everphone, we deal with phones as a service (PaaS). We rent phones for business with MDM (Mobile Device Management), which separates business data from private data. It actually functions as two software on one single phone, and data from one software can't be moved to another software. Moreover, it is available no matter the phone’s operating system nor manufacturer. We can say that we have solved the issues concerning work termination for using company mobile phones in private.

One thing more to say is that MDM is GDPR compliant because it pre-configures the apps and access. This can be done also on the phones owned by employees. So, in case of work termination, whatever the reason for it is,  thanks to the MDM on phones, business data is easily removed from the phone, and the employee won't have access to it. This is also the case when the phone is lost or stolen.

With the help of MDM, the employer has the option of enabling or blocking the use of certain apps in software used only for business purposes, while the employee can download all the apps they want for private use. This means that even the contacts won't be intermingled. WhatsApp or Viber on the software used for business won't have access to the employees' private contact list, and vice versa. So, employers won't have to worry about the data protection of company cell phones when in private use.

Reasons for MDM software being the best solution for dealing with company mobile phones after work termination:

MDM (Mobile Device Management) functions as dual software on one single phone. Here, at everphone, we have an option that employees' can use their phones, and with their agreement, we can install this MDM software on the phones they already own if they decide to use it for business purposes as well.

This rapid progress of technology has brought up the issue of one's privacy and how to protect your data from any possible misuse or stealing, which may cause work terminations and legal charges. Thanks to GDPR, most things are regulated. However, this may cause additional issues when we talk about company phones in private use in case of work termination.

Here, at everphone, we use MDM software to facilitate employers with extracting business data from employees' phones in a way that it doesn't endanger private data, thanks to the MDM dual software function. Even better is that MDM is available with any rent option at everphone, with any manufacturer and operating system. Also, it can be installed even on the phones owned by the employees. 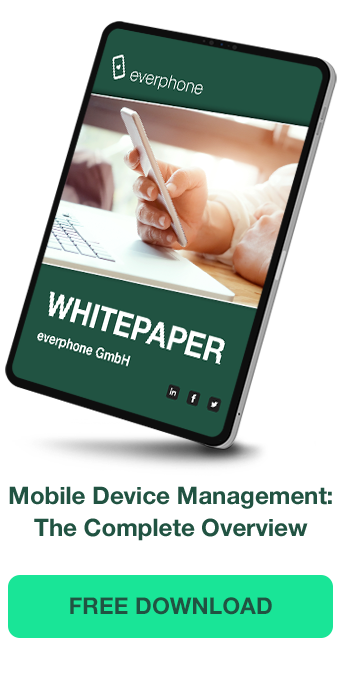