What Is the Average Smartphone Lifespan?

As much as smartphones have become an essential tool in our daily lives, they don’t last forever. Even the best phone will eventually give you problems before dying, leaving you to find a replacement. Have you ever thought about how long your smartphone’s lifespan is?

In this article, we’ll be covering the average life of smartphones, what affects their lifespan, and how to prolong your phone’s lifespan.

What is the average mobile life expectancy?

There is still a big difference of opinion regarding the average lifespan of a mobile devices.

Many sources believe that the average lifespan of smartphones is currently 2.5 years. However, other sources claim that it could be closer to 15-18 months for newer generation devices.
However, a much clearer picture becomes apparent when we break up the life expectancy based on the brand. We see the bigger brands having longer lifespans. The lifetime of smartphones like Samsung and iPhone is much longer than smaller brands.

Here is a breakdown of the average mobile life according to the different brands:

Despite having such a short lifespan, it’s possible to stretch the life expectancy of your smartphone even further with proper care. Some devices can even last upwards of five years if treated gently.

However, you might start noticing a decline at around the three-year mark. It’s usually at this point that your hardware becomes outdated, with no new operating system updates from developers. When this happens, you’ll see that your phone struggles to install new applications.

It’s also at this point that you might notice that your device’s battery doesn’t last as long as it did originally. Once the battery starts declining and you can’t install new apps, this is when people start looking at replacing their devices.

Factors that influence your smartphone’s lifespan

There are a few different factors that influence the average life of smartphones. Here are a few things that will impact the life of your device.

Damage is one of the biggest reasons a smartphone doesn’t last as long as expected. While cracks can be repaired, it’s often so expensive that it may be cheaper to buy a new device.

If you supply phones to employees, it’s good to look at phone rental options, such as those provided by everphone, that include repairs and replacements of devices. This can save businesses a lot of money since accidents happen, and paying to replace or repair phones can quickly eat into your budget.

Alternatively, borrowing or leasing a smartphone means that you’ll have to pay for the repairs if the device breaks. If the device cannot be repaired, you’ll still be responsible for honoring your contract while also getting a new smartphone.

Batteries are another major factor that can affect your smartphone’s lifespan. The batteries used only have a certain amount of charges before they become ineffective. Every battery has an average of between 500 to 800 cycle charges.

If you charge your device multiple times a day, it will most likely have a shorter lifespan than someone who charges their device every two days. Modern devices also no longer have replaceable batteries. Once your batteries stop holding a charge, you risk manually replacing them, which requires some knowledge, or you can pay someone to do it for you, but it can be quite expensive. In many cases, it’s cheaper to get a new device.

Heat is also very bad for batteries. When devices heat up when placed in a hot area such as direct sunlight, the batteries have to work harder, meaning that they won’t last as long.

It’s usually at this point that developers stop releasing system updates for these devices. However, manufacturers with a very large portfolio often tend to focus on the premium and middle class models with the updates. Entry level phones are often neglected and no longer supported after a while.

Generally, most iPhone devices will receive system and security updates for five to seven years after releasing. Android devices have a much shorter period, only receiving these updates for 2-3 years after the release of a device. Therefore if you buy an older model or a secondhand device, the life expectancy will already be shorter.

How to extend your mobile phone’s life

There are ways to extend the lifespan of your device so that you can use it for as long as possible before replacing it. Here are a few ways to improve how long your smartphone lasts.

Charging your device to 100% places more strain on the battery than charging up to 80%. It also uses a full charge cycle, and since there is a limited amount of these, you actually want to use them sparingly. The same applies when you let your battery drain all the way to zero before recharging. As such, it’s a good idea to ensure that your charge stays between 20% and 80%.

Screen protectors are one of the simplest and cheapest ways to protect your device’s screen and extend its lifespan. There is a wide range of different screen protectors available, but we can assure you that even using the more expensive ones is cheaper than repairing your screen if it gets broken or replacing your device.

Phone cases, like screen protectors, are a great way to protect your device if they get dropped accidentally. Once again, many different types of phone cases are available that vary in durability and protection.

Example: protection cases from Pela come in a multitude of designs and are made from sustainable materials

You can get a specialized case designed to protect the device from heavy damage. These are ideal if you work in fields like construction or other physically demanding sectors where damage can occur more frequently. These cases might be too bulky if you work in an office or treat your device gently, so there are also more slimline cases that protect.

Get rid of underutilized apps

Most of us have apps that we hardly ever use. The problem with this is that those apps may continue running in the background, putting a strain on your battery and hardware resources. As such, it’s a good idea to frequently go through your apps and remove the ones you no longer use.

What should you do when your smartphone’s lifespan reaches its end?

What do most of us do when our devices have run their course and stop working? Some of us keep them in boxes stored in a cupboard for years before throwing them away. Others immediately throw away their old devices.

The problem with this is the effect this has on the environment. The materials used to create a smartphone take many years to start decomposing, thus, filling up landfills, but the materials used also release chemicals that can pollute the ground or even water sources due to runoff. As such, smartphones must be disposed of correctly.

Recycling your smartphone is one of the best ways to get rid of your old device, as nearly 80% of a cell phone is recyclable. Most phone recycling services will also first check to see if the device can be refurbished to give it a new lease on life.

The cell phone’s average lifetime may not be as long as we want it to be, but your smartphone’s lifespan can be increased with the proper care and maintenance. By paying careful attention to your battery and how often you charge your device and making sure it’s updated frequently with no unused apps running in the background, you could potentially extend the lifespan past three years (maybe even up to five years).

If you’re considering smartphones for your business and are concerned with the cost of procuring and then frequently replacing devices, renting devices through a service like everphone might be the best solution for you. 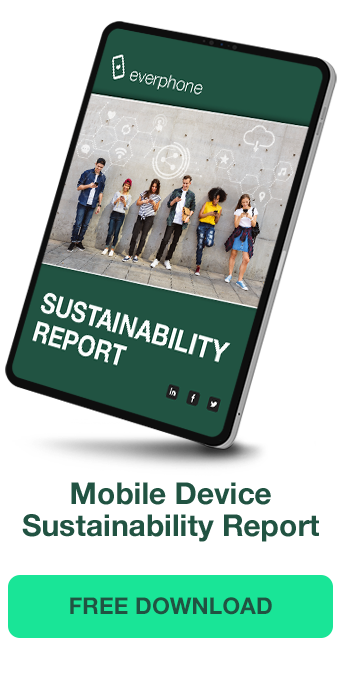